Where did we leave off last night? Oh yes, my bloody backside and defcon 627.

Anyone who has kept track of my last few road trips is familiar with the resiliency of our collective crew’s attitude when it comes to wheelchair issues. We’ve pushed me around Southern California in a dead wheelchair for days on end, visited the Grand Canyon in a Franken-chair held together with pool noodles and a set of Wal-Mart suspenders, and have managed to do so somewhat gracefully and even with a little humor. And I know a lot of that probably hinges around my ability to roll with whatever punches Life decides to throw my way. Wheelchairs break. Shit happens.

But when we saw evidence of pressure on my backside in the world’s worst impromptu examining room on the planet, my PTSD kicked into hyperdrive. To know why that happened, you need to know my history with pressure. In total, I’ve spent one third of my paralyzed life stuck in bed battling skin issues, with the most recent stint coming two summers ago while planning this exact same trip, ironically. These are the types of things I lose years to. The kind of things that kill people. People like Superman. People like my friend Dan. They are not something you play around with. Needless to say, I wasn’t too enthused with dragging my body back off that card table and into an improperly positioned, broken wheelchair. We needed more options.

The only thing the airline thought to do was call for a transport to our hotel, but 911 responders could only take me to one of the local hospitals. That landed me in the University Hospital emergency room for four hours with a doctor who had either zero understanding of the severity of skin issues in quadriplegics, or just didn’t really care. Probably both. Meanwhile, the airline’s mobility connection finally arrived and was unable to revive my chair, saying they needed to take it to the shop for at least a couple days. Hopefully Tuesday, they said. They were able to provide an ill-fitting hand control wheelchair as a loaner until that time. It beats pushing, I guess. All we needed was an hour of the most brutal, pothole filled cabulance rides of my life to finally get us to the hotel, where we had to jump through seven or eight hoops to prove that, yes, we do have two rooms booked and, yes, they did have our bags that had been delivered from the airport.

All that explains the micro-blog Sunday night. We were running on no sleep and little more than Dunkin’ Donuts breakfast sandwiches after the most brutal travel day I have yet to experience. We crashed out at 9 PM and didn’t even consider trying to assess the damage until mid-Monday afternoon. As far as we can tell, the bloody skin on my backside appears to be more of the shearing nature (i.e., more friction than pressure), but it’s hard to tell at this time. The only thing we know for sure is that I’m not out of the woods one bit. I’ll need to limit my time out of bed precipitously until we start to see progress, which completely blows up any of the plans  we had coming in.

We spent much of early Monday evening with a gracious hotel tech attempting to turn this hand-controlled jalopy (now unaffectionately known as The POS-Express) into something that could at least properly support my frame. That left a couple hours for us to exit the hotel a little more presentably than the homeless folk we must have looked like on arrival. After clumsily navigating the POS down a few blocks at a blistering 2.5 mph pace, we found ourselves smack dab in the middle of Times Square. A few slices of pizza and a hand full of street performances later, and our frazzled nerves calmed just enough for us to enjoy the view. Hell, Alicia even mooned the Jumbotron, which I’m sure most of the other tourists won’t realize made their photo streams until they get back to wherever they came from. We stopped and got some cheesecake and went to bed mildly optimistic considering all that we been through. 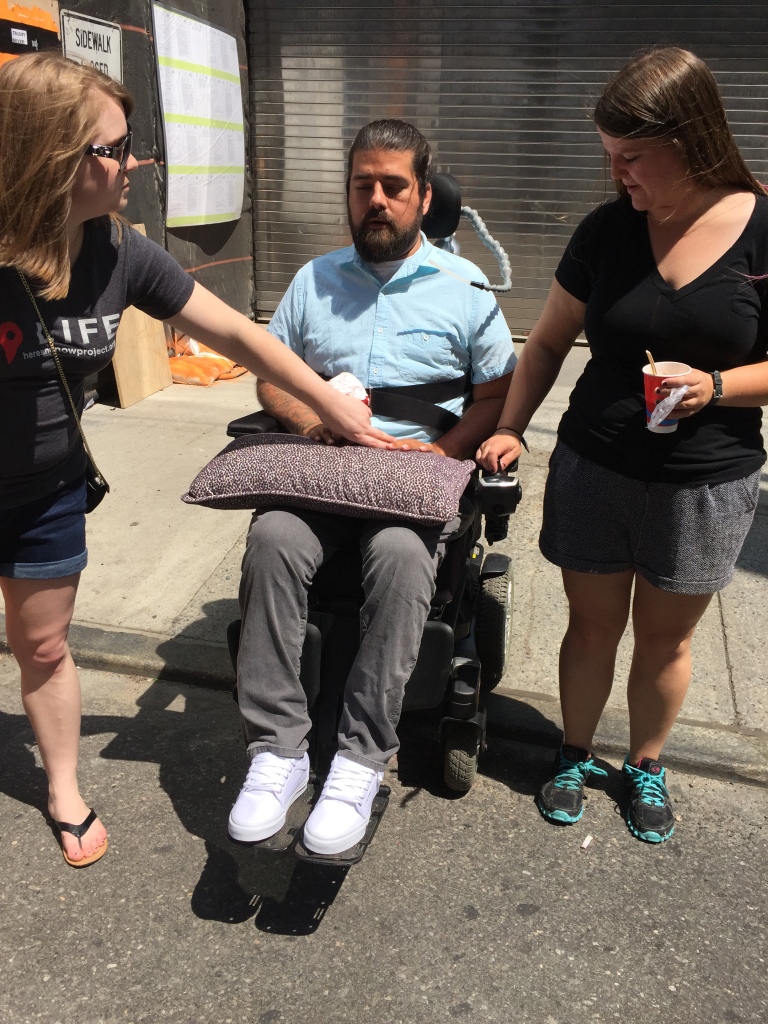 We began the morning with the goal of familiarizing ourselves with the public transportation system. This should have been what we were doing Sunday, but we tried to soldier through regardless. In very un-Kenny fashion, I did  quite a bit of research into the accessibility of the New York mass transit months in advance. My only mistake (and a crucial one) was forgetting that the word “accessible” means a lot of things to a lot of different evaluators. “Accessible” doesn’t always mean “wheelchair accessible” which doesn’t always mean “power wheelchair accessible.” After tracking through the sweltering afternoon heat in the convection oven that is this town, we finally made it to an “accessible” subway station, only to find little hurdles like these preventing us from boarding the train.

While that little gap doesn’t seem so formidable in the picture, one that probably wouldn’t pose too much of an obstacle were I in my own wheelchair under my own control, you must remember that the logistics of me in the POS Express adds just enough of an extra wrinkle to make it terrifying. Just getting through an elevator doorway, for example, requires two people to enter before me, one to keep the door open, and another to take the handoff of my drive controls when the person driving behind me can no longer reach. Throw that dynamic into the madhouse that is subway traffic and it’s near impossible. Again, in my normal chair? Challenge accepted. In this thing? Not so much. We chose to go to outside and test our luck with other forms of transportation.

And then the mobility company called, saying that, in all likelihood, I won’t get my chair back until Thursday because they had to special order some fractured caster bearings as well as an electronic module that were all damaged in-flight. If I thought morale was at an all-time low when we got lost and almost ran out of gas on the way to the Grand Canyon, I didn’t realize there was an even bigger hole for us to fall into on the other end of that phone call. With the wind completely taken out of our sails, we crawled our way back to the hotel to lick our metaphorical wounds. Okay, that was probably a poor choice of words given the situation, but whatever.

I’m finding my mood to be about at the lowest it’s been on any of my road trips so far and trying not to berate myself with an internal dialogue filled with statements that begin with “You should’ve done this/that.” But it’s hard right now, especially as the “captain” of these road trip ships, when I see the crew as affected as it is. So I have to constantly remind myself that this entire trip would’ve been infinitely easier had the aviation industry had something even remotely more accessible for people traveling with their wheelchairs.

I should probably wrap up this bitch-fest here and take a minute to point out that nearly everyone we have dealt with besides the one doctor have been supremely kind, thoughtful and as accommodating as they possibly could be, especially the people on the ground at the airport. It’s not their fault the higher-ups in their organization are tone deaf to the needs of my community.

Who knows, maybe a week from now we will be sitting toe to toe with our elected officials with that much more to talk about. As it stands right now, I’m not really digging this current plot device. But then we rounded the corner right by our hotel and found this monstrosity staring us down.

I know, I know. This too shall pass. We’ll see what tomorrow brings.