16 hours of sleep and my senses have recovered enough to give you all rundown of what should become a pivotal example of why the aviation industry needs to finally join every other transportation agency in complying with the Americans with Disabilities Act.

It all started out with the four of us in a quite chipper mood. We followed the exact same protocol used on a wildly uneventful test flight to Portland a little over a month ago; arriving with plenty of time to pre-board, thoroughly explaining our system to flight officials before heading down the jetway, breaking down my wheelchair with pit crew-like efficiency outside the plane (removing all crucial pieces and wrapping the rest in foam & cellophane), making the best of a terribly flawed system of transfers in and out of that bullshit aisle chair situation, and performing vigilant pressure releases on my roho cushion every half-hour for the duration of the five hour flight. In short, we did everything by the book. As we banked one final turn southbound descending towards the Newark Airport tarmac, the view of the Manhattan skyline bathed in a saffron glow of morning sunlight seemed to bless our arrival.

We deboarded United flight 1695 expecting my wheelchair with its accompanying bag of the armrests and footrests to be waiting in the jetway like they were after our Alaska Airlines flight to Portland. They were not. It took a half-hour of me sitting on the clipboard on wheels for my chair to finally show up, but the arm/footrests were nowhere to be found. Good thing we kept my head controls and main cushion on the plane with us, so I was at least able to limp from our terminal down to the baggage claim with my chair slightly tilted to not run over my own feet. It looked something like this: 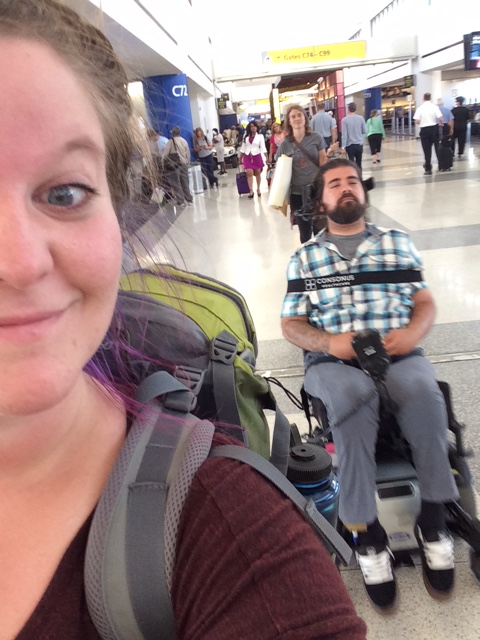 II remember saying something jokingly like, “If this is the biggest hiccup of the trip, I’m fine with that.” It wasn’t even 15 seconds later that my chair lurched hard to the right and came to an abrupt stop, the words “CONTROLLER FAULT” flashing ominously on my screen. Claire and I met eyes. Not again. Fortunately, a quick reboot got us back in motion and we made it down to baggage where the rest of my chair parts were waiting. We quickly reassembled my ride and were about to exhale our collective sigh of relief when the chair completely lost power.

The team went into full troubleshoot-mode: Claire assembled the rest of our luggage, Amanda started checking wires and Alicia got breakfast and got ahold UA officials. After more than an hour, we had to admit the solution was beyond our power, and were left waiting to see what the airline could come up with. At 8 AM. On Sunday. On Father’s Day. We sat there for a couple hours, and it dawned on me that the tilted position I was stuck in was not ideal for the integrity of the skin on my ass. We asked airline officials if they had a room available for us to transfer me out to perform a skin check and the best they could come up with was a folding card table in a cramped family bathroom that reeked of piss. 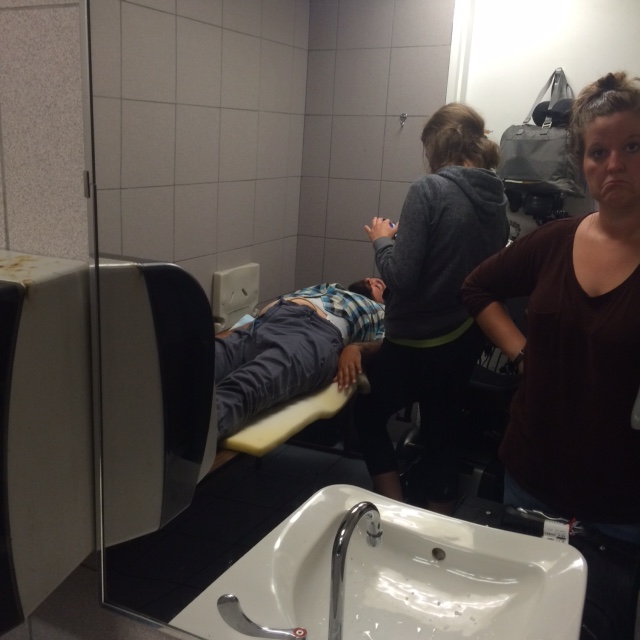 After an extremely awkward transfer we pulled my pants down and saw blood, taking the situation from seriously inconvenient to defcon twelve.