Well, I guess I called it. Day Two started off sideways thanks to the utter betrayal of a piece of usually trustworthy technology we rely on for these trips, and now we’re in a fairly shitty situation. Okay, that’s not entirely true: I’m pretty sure the previously lauded Road Mode played a part as well.

It’s been well-established by now that our weird days start off just as innocently as the rest. After some midnight alarm clock malfunctions and Slumberjack being her usually noisy self, we rose from a fitful night’s sleep, and filled our gullets with a rather impressive continental breakfast, which helped rouse our spirits. (Go Red Lion!) After quick runs to the gas station and Safeway for snacks and coffee, we ambitiously looked up the address for The Rio Hotel & Casino, the host of this weekend’s event, and punched it into the van’s GPS. 14 hours? Challenge accepted.

All we had to do was pick out some tunes and follow the trusty blue line, right? Heh.

With the long day ahead of us, I cracked open my Kindle app to polish off the Krakauer book I’d been neglecting for a while, and settled in. Like a good navigator, I made sure to keep an eye on our progress. Okay, I looked up at the screen a couple times. In hindsight, the south by southwest heading on the digital compass did register as mildly disconcerting, but I wrote it off as nothing more than curvy country roads. It wasn’t until about noon when I noticed an unsettlingly familiar, snowcapped mountain on the horizon. Mount Shasta. We shouldn’t have been anywhere near Mount Shasta.

We pulled over to the side of the road and scrambled to catch our bearings. Upon zooming out, it was abundantly clear that the way our GPS decided to take us was clearly not the same as the path I’d meticulously researched on Google about five minutes before we left yesterday. Fortunately, we noticed in the nick of time, because a connecting route just a few miles ahead put us back on course, somehow cutting 170 miles from the GPS’s nefarious original plan.

I’d be lying if I didn’t admit that I let the error rent space in my head for the better part of an hour after we turned around. But as we started cutting down through the northeastern tip of California and into Nevada, the serenity of the landscape helped to dissolve my focus on the past. As we neared the border, we rolled up on what remains of the Northeast coastline of Eagle Lake without knowing it. The only way we were able to recognize what’s touted as the second largest natural lake in the entire state of California, was the big blue splotch on that annoying little screen on the dash. After this summer we had in Washington, I can’t help but wonder it seems like these are our future. 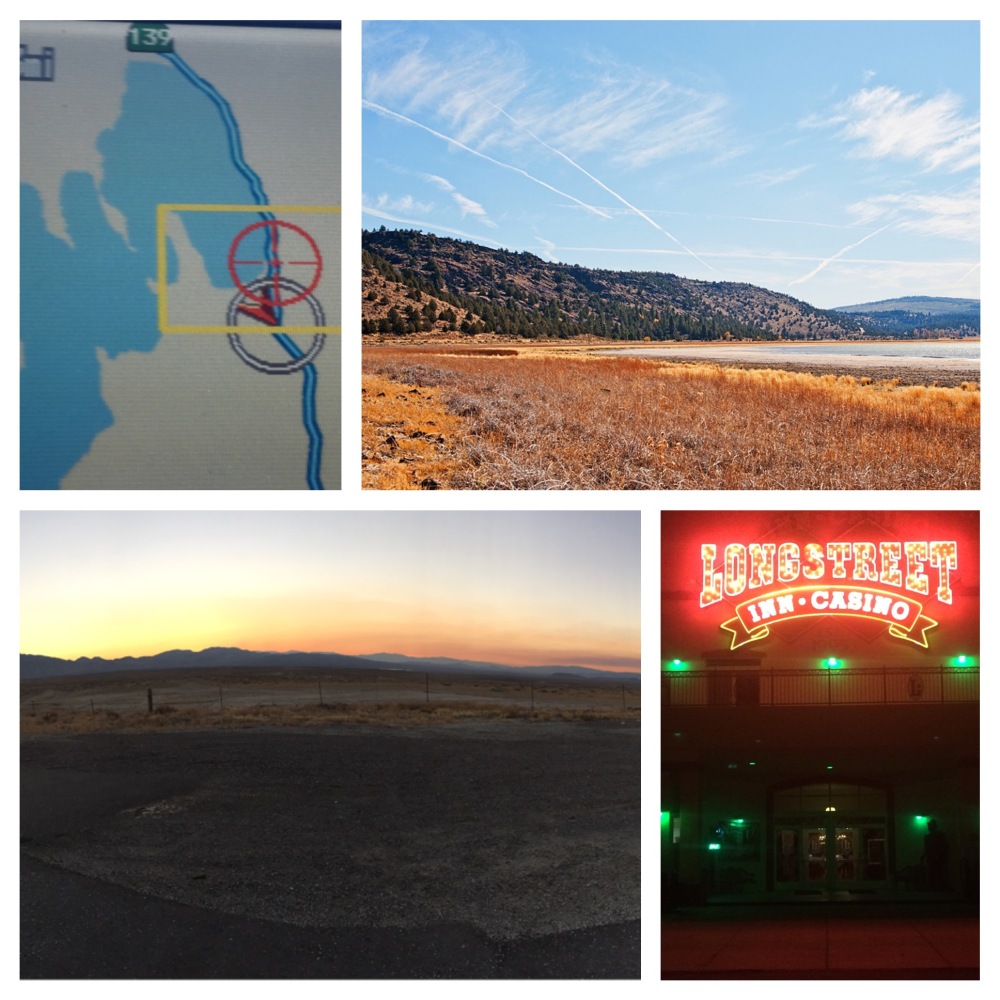 All in all, the detour only cost us a little bit of time. Well, that’s not completely true either. Instead of making it to the City of Sin, we had to find lodging a little further out of town in a little Death Valley joint called the LongStreet Inn & Casino. As we pulled down the last few miles, an acrid odor crept its way into the van. At first everyone started pointing fingers at each other, assuming the day’s snacks were to blame. It wasn’t until we checked in at the hotel that they told us what really happened.

Apparently flash floods and a whole valley full of cow crap don’t mix too well. Sweet. Oh, and as I write this, youknowwho is back to sawing logs. Wish me luck getting some sleep with this kind of assaults on the senses.