If you haven’t figured out by now, I’m a big quote guy. One of my absolute favorites is attributed to Theodore Parker that says, “The arc of the moral universe is long but it bends toward justice.” I got the tattoo below of song lyrics in my handwriting a couple years ago that, I think, along with Parker’s century-old words, really applies to today’s Supreme Court decision that finally legalizes same-sex marriage throughout the nation. 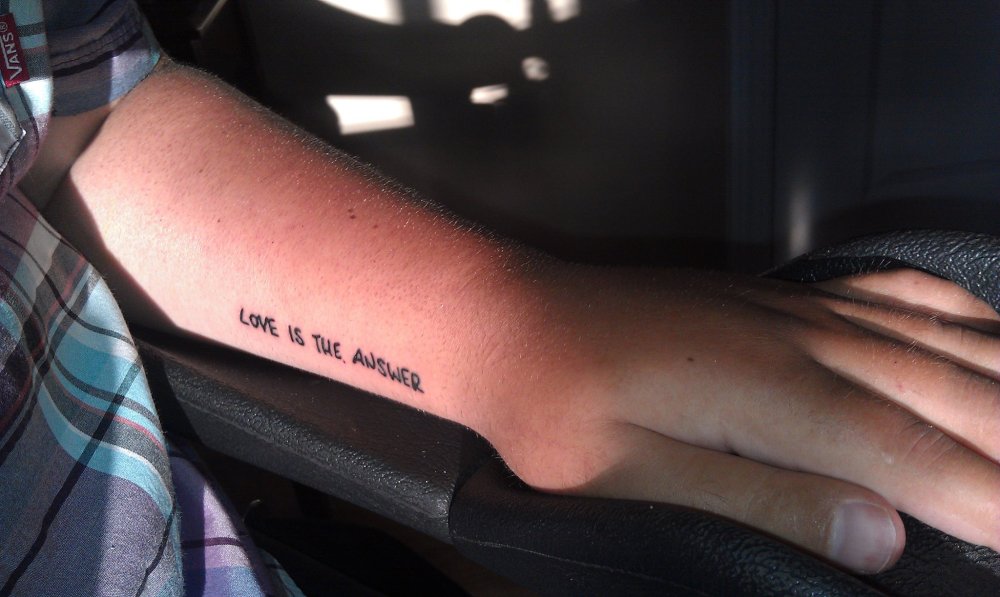 The lyrics are in reference to two different songs. The first is Jack Johnson’s “Better Together” that says, “Love is the answer / At least for most of the questions in my heart / Like why are we here? Where do we go? / And how come it’s so hard?” The other is Blessid Union of Souls’ “I Believe” in which the chorus goes “I believe that love is the answer / I believe that love will find a way.”

I can honestly say that I don’t have many gay people in my life, save for a few acquaintances and maybe a relative or two through marriage somewhere, but this is one of those things that just always made sense to me. Life can be hard and is so often bent towards tragedy that the only true reprieve we have from that harsh reality is finding another person to share our lives with.

Incidentally, today marks 10 years since I carved out this little corner of cyberspace known as my blog by posting a mass email that I sent out about six months after my injury. It was something people really gravitated towards because it was honest and straight from the heart, but as I have looked back on it over the years, there’s a part of me that cringes at the fact that I inadvertently implied that guys need to find a girl and vice versa. I think that post, along with a lot of my earlier stuff, is due for an update filtered through the last decade of my experiences and personal growth.

Another one of my favorite quotes comes from my favorite author, Hunter S Thompson, who said, “History is hard to know, because of all the hired bullshit, but even without being sure of ‘history’ it seems entirely reasonable to think that every now and then the energy of a whole generation comes to a head in a long fine flash, for reasons that nobody understands at the time–and which never explain, in retrospect, what actually happened.”

Even though I may count myself once more as a bit of a cynic after watching the President I voted for lose both his spine and his mandate when the opposition maddeningly went all third-grade and effectively took their ball and went home, it feels really good to see that the wave of hope we were riding six years ago hasn’t completely broken and rolled back as Hunter’s did some 40 years ago. Because just as he said, history is a hard thing to know, and it’s a difficult to see things from such a zoomed-out perspective. But today is one of those days where you can catch a glimpse of things arcing ever so slightly towards justice, where love still found a way.

All that’s left now is to wait half a century for a motion picture to put things in perspective.