I was seven years old when my family moved to the Lake Tapps area that would be my home from then on. That’s when I met a kid named Kurtis Sandmire. We were both the tiniest kids in the second grade and our initials were “K.S.” but that’s pretty much where our similarities ended at the time. While he was out on the football field picking fights with the fifth-graders, I was busy playing My Little Pony with the likes of Mariah Goodchild and Krista Venn. I’d like to think I was a ladies’ man in training, but the truth is that I was a big wuss. He scared the shit out of me. I dodged him on the soccer field for years and it wasn’t until we found common ground on the slopes of Snoqualmie Pass through our district’s ski school that our friendship really started to develop.

Our paths parted after sixth-grade when he opted to transfer down to one of the Auburn junior highs so he could wrestle and play football, and I chose to continue wrestling in White River. Our seventh grade years we were both league champion 78 pounders in our respective counties, and suddenly there was talk of a potential Kurtis and Kenny rivalry in our tiny circles. Thankfully, whatever higher power I have made the merciful decision to have my growth spurt start before his. By the time we reconnected in ninth grade, I was wrestling up at 115 and he was still down at 85, but the weight differential was erased when we stepped on the mat for our first practice. He gave me all I could handle and more. A year later, we shared an experience that altered the way I looked at friendships forever.

It was our sophomore year when, rather than being fed into the national powerhouse that is/was the Auburn Trojans, we opened Auburn Riverside High School and were forced to build a wrestling tradition from the ground up, myself at 122 and Kurtis at 101. For warm-ups, our team played a game called “Slap Back” which, as you can imagine, was just a much more brutal version of tag that also incorporated participants kneeling behind unsuspecting victims so that someone could shove them head over heels onto the mat. One day I made the ill-advised decision to kneel behind our 148 pounder, Jason, a known tough guy from the rough side of town who I’d watched cram some guy’s face into a car bumper during a fight in the school parking lot on the first day of school. As I probably should’ve expected, the instant he was tripped, he popped up, spun around and slapped me right across the face. Stunned and scared, I backed away from what was sure to be a one-sided beating. That’s when I saw flash out of the corner of my eye, and Jason disappeared from view. Kurtis had hit him square in the jaw and was on him like a badger on a rattlesnake. 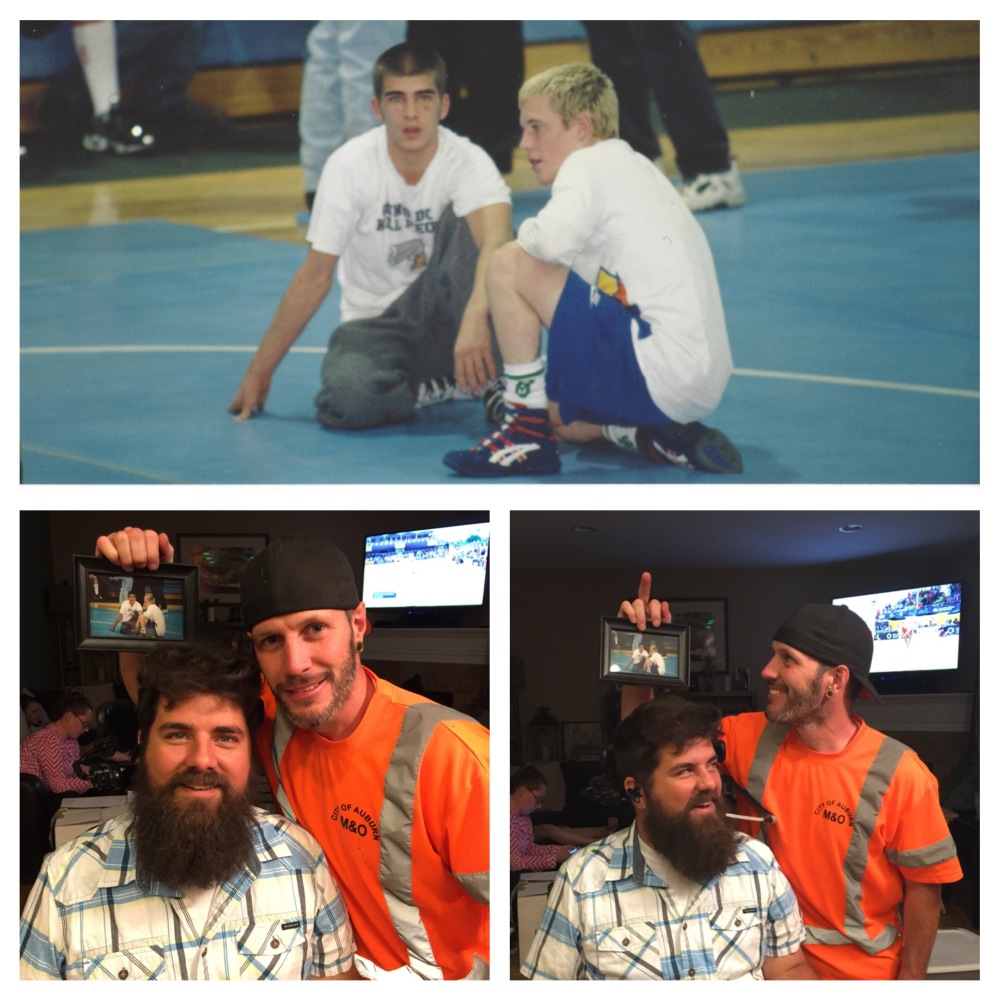 There is a special bond that develops between wrestling practice partners that is almost thicker than blood itself. It probably has something to do with banging heads, fists and limbs, day in and day out, in effort to push each other to the next level that makes you invested in your partner’s successes more than any other sport. I can’t tell you how many times our practice sessions in the backyard got a little too scrappy to the point that our moms would have to get out the hose to break things up. Despite our elevated tempers, our brotherhood never wavered. Our paths parted again after we graduated, but we reconnected soon after his first daughter was born (incidentally, the same day as my oldest niece).

After I was injured, a lot of my friends, understandably, had trouble coming around and seeing me. It’s hard to see a friend in such dire circumstances, I would have struggled if it were one of them in my place. Not Kurtis. He and his family were constant visitors all those years I was a shut-in at my parents’ house. It was Kurtis that helped bring me back out into the world, dragging me to the state wrestling tournament every year so I could connect with old college teammates. And those few times when I have had a caregiver bail on me, it has been Kurtis who came and slept on my floor because he didn’t want to not hear me calling from the other room. He’s had my back for as long as I’ve known him, and I love him for it.

He turned 35 today, and I got to give him one of my favorite pictures of us from back in the day. Covered with piercings, tattoos and arguably more scar tissue than myself, he’s still as intimidating as he was the day I met him back in the second grade. But that rough exterior covers one of the warmest hearts you will find on this planet or any other, and it shows every time he greets me with a kiss on the top of my head. He is a loyal husband and an incredible father, and I couldn’t be more proud to call him a my brother of almost 30 years. He has taught me how to be tough, and he also taught me how to be gentle. Happy Birthday, Buddy.