A spinal cord injury is an interesting beast to wrangle with, both physically and psychologically. It differs from other causes of paralysis like MS, ALS or Parkinson’s in the sense that it’s not a progressive degeneration of your physical abilities where you are constantly adjusting to the increasing loss of independence. It’s abrupt. There’s a before and after. One day you are fully capable, and the next you are not.

That kind of shift is difficult to process because there is a memory hardwired into your brain as well as your muscle tissue that no longer connects. Suddenly trapped in your own skin, your psyche screams to break free from the invisible shackles binding you. Most of those circuits tend to fade over time as you slowly adjust to your new normal, but there are always at least a few of those memories for everyone that stick around as if it was just yesterday. For me, it’s always one of two distinct scenarios.

The first takes place on Lake Tapps, where I grew up and spent every summer wakeboarding behind my dad’s boat. I can still hear the handle squeak in my grip as the boat surges forward, pulling me upright on my board and sending lake water cascading down the creases of my board shorts like a temporary waterfall. And I can feel my leg muscles straining as I edge hard on my heels away from the boat, setting up my approach for a scarecrow – a front flip with a half twist. I can always spot the landing far outside the wake and my right hand gives the rope a little tug when I’m midair to ensure a smooth landing.

The other scenario goes  straight to the wrestling mat, where I spent countless hours year after year for half my life, drilling thousands of takedowns, throws  and turns until my lungs burned and my muscles ached. I can still feel that hair thin tipping point in a match when my opponent would pressure forward against the collar tie just enough, triggering a series of slick maneuvers that lower my elevation, sending my prey off-kilter as I blast through a perfect head outside single and transition to a double leg for the takedown and two hard-earned points. My hand trembles as the ref raises it in victory.

But eventually, the mind snaps back to reality and you realize that those times are long gone. It has been quite a struggle to wrap my head around the loss of my athleticism, which was a key component of my identity, and still is. People may see a boxy wheelchair carrying an atrophied bag of bones when they first meet me, but that’s not how I feel. In my minds eye – as well as my muscle memory – I am still the emphatic hand talker that could do a backflip where he stood. And although I have come a long way in accepting my fate, I still have nights where the what-ifs and if-onlys like to come out and play.

There have been many late-night hours spent on YouTube watching videos of parkour, The Tough Mudder and American Ninja Warrior, wondering half-jokingly which activity would have left me paralyzed if I hadn’t gotten hurt on the mountain. Other times are much more frustrating; where I lament the many full contact sports I might have been able to compete in if my injury were not quite as severe. If I had broken my back instead of my neck, I might be winning sled hockey gold, or maybe just playing wheelchair basketball with some friends. There is also the painful reality that I could be legally bashing into other wheelchairs in quad rugby (a.k.a. Murderball) if the break was as little as a single vertebrae further down. That sucks.

But over the last month, I was given a glimpse into my old life, and possibly my future, by getting back on that hill where I was hurt 10 years ago. My senses were fully engaged for th 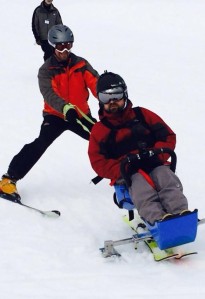 e first time since it happened. The sights and smells from the chairlift; the sound of snow crunching underneath my skis; the rush of wind on my face as I carved wide turns out of the side of the mountain; and the surge of adrenaline after I took a hard spill and survived. All of those sensations and more had been completely blocked off in my memory; trumped by the tragedy of one horrible night. Not anymore. It was as if something was unlocked within my mind and body. I felt like me again.

A huge thank you to Ted, Mark, Matt, Steve, Dan, Sara, Milena and everyone behind the scenes and on the mountain with Outdoors for All for an incredible three-week experience that did far more than unlock a slew of old memories, it reintroduced me to the athlete I thought I’d lost. I can’t wait to sign up for another session next year. Until then, who knows? Maybe skydiving is next?

UPDATE: Here is the link to a story and video that aired on KING5 News tonight by John Sharify and Scott Jensen: http://t.co/8gkwMxNOCw